A few tips to leading your own grand conversation:

1)  Set clear expectations- It will really be important to be clear that when a person talks, you are listening to them speak and not interrupting them. I have my students sit in a circle so they can see everyone in the class. Grand conversations work great when students are really listening and adding on to each other. A smart idea would be to review with them a sentence starters chart as a scaffold for their conversation. I found a great one on pinterest with conversational sentence starters:

Here’s a quick chart I came up with to help set expectations: 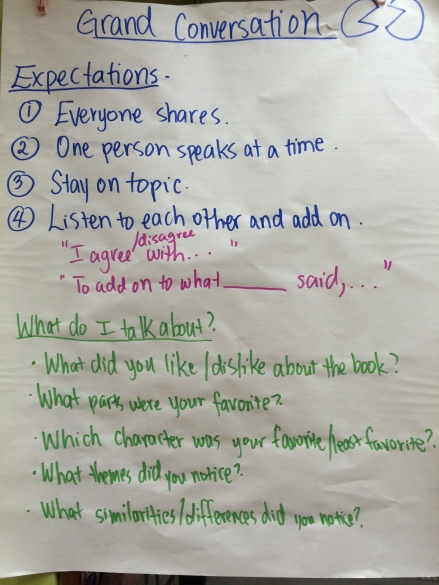 2) Make it mandatory for everyone to participate- A great tip that a colleague gave was to give each student 2 index cards. After they speak, they put the index card in front of them. Once they use up both index cards, they have to wait until everyone else shared to speak again. I tried this with my class and it really helped getting everyone to share. I loved seeing my more reluctant sharers really making meaningful contributions.

3) Use open ended questions to get the conversation started- Also, one thing I tried to do was to spice things up by making a few controversial statements (about the characters) that would allow for debate among the students. Here are some questions that you could use to start the discussion.

As the facilitator, depending on the topic and students, if the conversation is not really going well or at a standstill, jump in by changing questions. Also, feel free to share your opinion about the topic.

5) Record it! – If you have an iPad, all you need to do is set it on a table next to where the students are sitting in a circle. Then, press record, and you can easily upload it to your class blog! If it goes well, you can use it as a example to show your students next year. Also, it’ll be a great way to motivate students to be extra focused and pay attention when they know they are being recorded. I have this iPad stand that I used to record:

Have you tried grand conversations in your classroom? Do you have any other tips to add? I would love to hear them!

One thought on “the art of grand conversation”