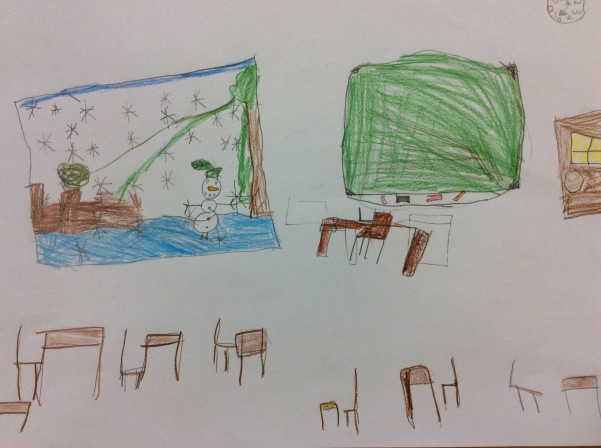 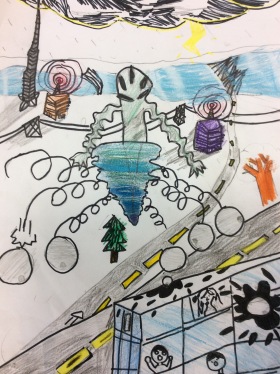 Last month I asked the lower elementary school if they would be interested in writing a story together in a way that is known to be called a “progressive” story.

Setting it up was simple. My first grade class started the story, we sent it to a second grade class, they sent it to our kindergarten, then it went to the other second grade class and finished with the other first grade classes. For those good with numbers, that is a story with five sections 🙂 Altogether it took us one week to finish with each teacher taking one 45 minute block to write the story, and the using center time, free time, or another language arts block to draw the illustrations.

Each class drew three illustrations to go with their section of the story (next time we do it I may ask for 4 illustrations per section) I shared a few of them at the beginning of this post. The pictures were put together and a few students from each class narrated the story. This video is the final result:

As the classes work on their sections I heard from the teachers how excited their students were about this story. They were able to modify the activity based on each grade’s level and worked in what they were studying in language arts. From bold beginnings to adjectives to mighty middles and excellent endings, it is neat seeing the whole story put together.

Here it is in written form:

In a classic classroom on a cold day, there was a kind teacher named Miss White. Dress in white from head to toe, she also wore a magical pearl necklace. On this cold day it started to snow. At first the snow fell gently and then it fell faster and faster. Miss White looked out the window and saw the snow swirling. The wind began to whistle and blow. Suddenly, a snow monster appeared! (1W)

The massive snow monster looked around and saw Miss. White. He threw dirty snowballs to her class, and covered Miss White’s class window. Miss White’s students were so scared and hid under their desks. Miss White touched her magical pearl necklace and said, “White White Miss White, turn my students into superheroes.” All 20 students turned into strong superheroes. Then the superheroes opened the gigantic window and flew out quickly. (2H)

One animal caught a robber and threw him and hit the snow monster, so it fell over. But the snow monster reappeared because it was indestructible.  The tiger and the lion rebuilt two new snow monsters from the body of the old good snow monster.  Then the two good snow monsters punched and kicked the bad monster and the robbers.  The super heroes punched the snow monster from inside his tummy.  The snow broke and the super heroes flew out.  Miss White had a book that told all the things that her magical necklace could do.  She looked up how to get rid of a snow monster. Miss White found that the only way to get rid of the monster was with fire.  The children said to the bad monster, “Miss White is going to put fire on you.”  The pearls shot fire at the monster, but it didn’t hurt anybody else.  The monster screamed because it was painful.  The fire police came and made a very humongous, humongous (the biggest in the world) campfire. (2F)

Ms. White touched her magical pearl necklace and said, “One of the jungle animals please trip the bad snow monster so he falls into the fire!”. Just then, two of the monkeys tied their tails together and ran in front of the snow monsters feet. They pulled their tails tight. The T-Rex stood near the fire and distracted the snow monster. The snow monster started to run towards the T-Rex. His feet tripped on the monkeys and he fell into the fire. He screamed as he melted away, “AHHHHHHHHHHH!!!”. The fire police caught the robbers and took them to jail. The superheros were turned back to students when Ms. White rubbed her necklace again. They went back to doing their work. The jungle animals came out from the mountain cheering, “GOOD JOB, THANK YOU, YAAAAAAY!”. Before they left to go back to the jungle the animals gave the students a fun ride on their backs. Everyone said thank you to each other for helping.  (1P)

The first question my students asked when the story was complete? “When can we write another one?”

What are learning engagements you do to get your students excited about writing? We would love to hear your ideas, and it just so happens that we have a comment section!

One thought on “Progressive Stories are as easy as 1,2,3!”