“Musical plays for the musically timid teacher…” Yes, that is the tag line for Bad Wolf Press that Melody discovered last year. Her class performed,  “The Turkeys Go On Strike”, which was a huge success. They have a wide arrange of musicals for the different grade levels and subject areas.  You do have to pay to order the musical, but it was definitely worth it.  It comes with a  copy of the script and a CD with all the songs and instrumentals versions as well. I can definitely say I am a musically timid teacher, but Bad Wolf Press makes it easy to do and fun for the kids.

This year, both fifth grade classes will putting on the musical, Geology Rocks! It is a mystery where Sherlock Holmes and Watson are trying to figure out what happened to Professor Rock. It goes along nicely with our science unit on landforms that we are currently studying. In the book, they give great tips on how to practice, rehearse and perform the musical. They give you a four week plan. So this week, we are on week 2, where students have been listening and singing the songs. There are 10 songs that are in the musical. The students don’t necessarily sing all of the songs. I have to admit, last night as I was trying to fall asleep, the chorus to the main song in the musical was stuck in my head…He loves, he loves, volcanoes…

Next week, the students will be reading the script and choosing parts. I hope to post more on the process and final production of our first ever fifth grade musical!

P.S. We ❤ comments! Let us know that you were here. 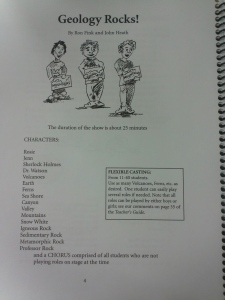